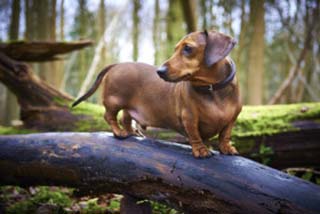 The Teckel breed is characterized by a strong personality, they are quite barkers, but they do it for their high sociability, as they like to be surrounded by people.

It is important to pay attention to them in terms of exercise that makes you practice, because in some cases, it is a breed that tends to obesity.

The Teckel has an elongated shape, with short legs and ears.They tend to predominate dark colors.

The dachshund ("badger dog" in German), also called teckel, dackel or dachshund, is a breed of dog with a peculiar physiognomy, due to a genetic mutation known as bassetism , which gives the specimens very short limbs in relation to body size.

In the Middle Ages, the hunters alreadyThey took advantage of the curious morphology of the Basset to get into the narrowest burrows. It seems that the Teckel comes from this breed and from the fourteenth century and appears in Germanic writings the term Dachshund (badger dog) to designate our short-legged dog. Among the German dogs we find some breeds (the Hanrove, the Bavarian and theDachsbracke) that could have been crossed with the old Teckel to form it as we know it today. In Germany it was used as a hunting dog and when it left for Great Britain it became a pleasure dog. In 1873 the Kennel Club recognized it as a breed.

The Teckel has many varieties. There are different sizes and colors, as well as coat types between the Teckel and the

Basically, the Teckel is a dog with an elongated body and short legs. They are small in stature, but have a big personality and their nose is so close to the ground that little escapes their attention. In fact, their morphology is the main reason for their hunting ability.

The Teckel isbalanced, with a strong personality and very barky, he is sometimes tenacious and stubborn. He is said to be a playful dog, with initiative and quite sociable although sometimes he can be distrustful with certain people. He is good with children and with the elderly and likes to be pampered and rewarded. He adapts easily to very different environments.

His friendly and sociable personality leaves enchanted tothe hearts of all who come to know him.

Although he can sometimes be quite stubborn, his behavior can be easily modified by a good owner who quickly changes the subject and gets the dog to focus his attention on some other activity.In other words, the owner refuses to acknowledge the dog's stubbornness and thereby avoids repetition of a behavior notMistreatment will only make a Dachshund with a stable temperament aggressive.

The fact that Dachshunds like people (especially children and the elderly) makes them charming. Certainly, they are among the most popular dog breeds in Germany, Great Britain and the U.S. Although their original purpose (hunting) is no longer the main reason for the

The Teckel, of good working lines, is not a hound in the strict sense of the term, but as he gets from this his excellent nose, he can do the work of a hound in his own way and in accordance with his small size. He is not a proper terrier, but works perfectly well underground in the den, as a terrier would, nor is he a proper braco,but it can do the work of this one, according to its size.

We should not pretend to equal one hunting dog to another, all have their advantages and disadvantages, their specialties according to their size, hair, etc. The teckel has qualities of almost all hunting dogs and in the hands of a good hunter who does not know how to train it well and who has a hunting ground of hair and feather and perhapssome burrow, a puddle near and some step of wild boars, will have in the teckel a small hunting dog that will lift any piece, will be able some fox to shot, inside or outside the burrow, will track the wounded boar and even will take the duck out of the water, provided that this conveniently adiestro.

Some Teckel tend to get fat, either by lack ofexercise or for their dietary whims.

Teckels do not smell and are exceptionally clean dogs.The Miniature reaches maturity at about 12 months of age, while the Standard may not be fully mature until 18 months.

Teckels are very long-lived dogs and manyRegardless of size or variety, the Dachshund is easy to care for and handle, making it a most desirable companion.

Due to their distinctive skeletal structure, Dachshunds can suffer from environmental and genetic problems common to dogs with elongated bodies. Because they live in an environment that seems to forget their special morphology, they tend toJumping, excessive stair climbing and other high impact activities often lead to serious problems with the vertebrae. When genetically inferior dogs are bred, they often produce genetically inferior puppies. These dogs, in turn, grow up to develop serious skeletal problems that are difficult or impossible to correct.In addition, overweight puppies are always at risk.

Problems and diseases to which he is predisposed include: intervertebral disc problems or disease (EDI), acanthosis nigricans, hypothyroidism, epilepsy, and eye problems such as cataracts, glaucoma, and progressive retinal atrophy (APR).

Descendants of ancientGerman hounds known as Deutsche Bracken, these small dogs were called badger dogs or diggers. Eventually they were crossed with small terrier-type dogs to give rise to the Teckel we know today. With the scent of the hound, its long, low body that can burrow into burrows, underground, and the enthusiasm and bravery for the hunt like those of the Teckel, the Teckel is a dog of the same breed as the Teckel.terriers, it is hard to beat the Dachshund.

Ancient illustrations and sculptures from the 15th, 16th and 17th centuries show us various Dachshund-type dogs hunting badgers.A statue of an ancient Egyptian pharaoh shows a Dachshund-type dog with the same name.In each depiction the characteristics of strength, endurance, courage andenthusiasm.

The breed began its formal organization when a standard of perfection for the breed was drawn up in the Deutscher Hunde-Stammbuch (the genealogical studbook for German dogs). When the first volume of this studbook was introduced in 1840, it encompassed shorthaired and longhaired dogs. Half a century later, in 1890, it included shorthaired and longhaired dogs.It continued to be published until 1935.

During the second half of the 19th century, several hunting Dachshund societies had their own stud books. These societies registered only those dogs that had proven their hunting ability. They were not concerned with the coat or morphology of the dogs registered. Their achievements in the field were the only criteria.for inclusion in their studbooks.

There were also societies at that time devoted exclusively to the different coat types of the Dachshund, but no identifying initials were given to distinguish the various coat types of the dogs entered in the studbooks.This also changed in the year 1915.

The following appellations were created: theThe initial "K" was Kurzhaar (short hair), the "R" Rauhhaar (hard hair), the "L" Langhaar (long hair) and the "Z" Zwerg (miniature). From that time onwards, the identifying initial was added to the registration number of all Dachshunds in the Teckelklub (German Dachshund Club).beauty shows with boxes, and the Gebrauchsteckel Klub, which organized hunting-related activities.

In 1935 these two groups merged their genealogical studbooks and their activities in the FD-RDG: the Fachschaft Dachshunde im Reichsverband für das Deutsche Hundewesen.

After World War II this society again took up the breed.

In England aIn fact, despite the problems of World War I, England had six major Dachshund breeders who followed a strict breeding code throughout the war. Although these breeders were often referred to as "pro-German" or "German sympathisers", they were adamant about the integrity of the Dachshund.Their efforts to protect this gene pool were successful.

Two of the first English Dachshunds to leave an indelible mark on the breed in the 1890s were Jackdaw (owned by Harry Jones of Ipswich) and Pterodactyl (owned by Sidney Woodiwiss). These ancestors continue to maintain their influence today.

Australia, Denmark,Holland and India are also countries where the Dachshund is popular. In the UK, the Miniature Longhair Dachshund is the favourite, and even outnumbers British breeds such as the Basset, Beagle and Whippet, with the latter being the second most popular.

For the FCI Dachshunds have three sizes: Standard, Miniature and Toy; for the AKC and KC only two:

The original standard Dachshunds weighed between 13.5 and 16 kg and were used in packs to hunt wild boar.

The Miniature originally weighed between 7 and 11.5 kg and hunted foxes or tracked wounded deer.

Nowadays it weighs between 3.5 and 5.5 kg and hunts rabbits or hares.

AMiniature Dachshund only 2.3-2.7 kg for hunting, provided the dog has a great spirit for the job to counterbalance its diminutive size.

Their shape is.elongated and low, with a long tail and straight muzzle, long, drooping ears, short legs and black nails. It has an elongated head and ears set high, set back and drooping. The tail is long and set on the prolongation of the back line.

These short legs are perhaps the most recognized characteristic of the breed and those that facilitate hunting in burrows, which was hismain activity within the hunt, where he shows himself to be a tracker and very brave, and who will not hesitate to face a fierce wild boar.

There are three varieties, according to the thoracic circumference measured at the age of 15 months:

Standard: maximum weight of 9 kg and a thoracic circumference greater than 35 cm.

Miniature: thoracic circumference between 30 and 35 cm.

Each of the size varieties can have three types of hair:

Short hair - The hair should be short, thick, shiny, smooth, well attached to the body, strong and hard, should not show hairless areas. The tail with fine hair and dense, but not too hairy.

Hardhair.- With the exception of the muzzle, eyebrows and ears, it has throughout thebody - mixed with the undercoat - an outer coat with the hair attached to the body, thick, coarse and thick. On the muzzle has a well marked beard. The eyebrows are bushy. In the ears, the hair is shorter than on the body, almost smooth. The tail with well developed hair, uniform and very glued.

In the three varieties of hair the same colors are allowed:

See_also: Doberman, get information before you buy it.

Unicolored dogs:Red, red-yellow, yellow, with or without black mottling. White is not desirable, but in the form of a few small spots is not eliminating. The nose (terminal part of the nose) and nails are black, although reddish-brown is permitted.

Spotted dogs (harlequins, brindles): The basic colour is always a dark colour (black, red or grey).Irregular grey or beige spots are desirable.Neither the dark nor the light colour should predominate.The brindle colour has darker stripes on a red or yellow background.The nose and nails are as in the case of uni orbicolored.