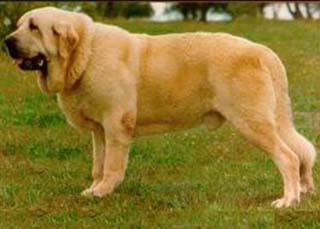 Of the Spanish Mastiff breed we can say that it is a tame, affectionate and balanced dog breed. It has an ideal character to live in a family with children.

The truth is that they are dogs that do not require much special care, with attention and affection, and a place where you can make them practice some exercise is enough.

They are dogs with a very balanced body.The males can weigh up to 100 kilograms!

The Spanish Mastiff is a breed of large-sized cattle dog originating in Spain, where it was abundant in almost all the territory and today it is particularly and since ancient times in León, Zamora, Asturias and Cantabria.

One of its varieties is the Pyrenean Mastiff.

The Spanish Mastiff is a breed of large-sized cattle dog originating in Spain, where it was abundant in almost all the territory and today it is particularly and since ancient times in León, Zamora, Asturias and Cantabria.

One of its varieties is the Pyrenean Mastiff.

The Spanish Mastiffis the dog that appears in "Las Meninas" by Velázquez.

In the past and today these dogs are used as guardians of ranches and isolated farms, guard dogs to protect herds from wolf attack.

Dog of rustic character, affectionate, gentle, noble and of great firmness in front of vermin and strangers.It is an intelligent molosser and not devoid of beauty.

They have a balanced temperament that makes them good companion dogs but they keep their instinct.

They are the perfect guard dog, sure of themselves and with a great sense of territoriality and possessiveness.

Their bark is hoarse, deep, deep and very sonorous.The Mastiff can let out its great ferocity if itperceives that the owner is in danger.

The Mastiff is an extroverted dog, friendly and peaceful in appearance, it is a "good-natured" dog.

His character makes him especially suitable for children, for whom he feels special attraction.He is big enough to protect with measured aggressiveness.

It is a dog with a great intuition and intelligence, obedient, tame and a bitindependent.

It is important not to neglect the education of the puppy and be firm from the beginning.

The Mastiff takes time to respond to orders and patience and perseverance is necessary.

Whether you want to train a puppy or an adult Mastiff, you can visit our sponsors at petclic.es to make this process more successful.

ThisMastiff is an easy dog to care for. The most important thing is to offer affection, a good and abundant food and a large garden where you can exercise at your leisure. In addition to daily exercise and long walks in the countryside.

The disease that most affects the Spanish Mastiff is the dreaded hip dysplasia.

This breed of dog has been known for centuries, although official recognition came in 1946. It seems that the first specimens were bred in Extremadura by crossing dogs from distant regions, possibly from India.

For centuries, the Mastiff has accompanied the flocks of transhumant sheep that roamed the ravines of the Pyrenean Pyrenees.the Iberian Peninsula, defending livestock from wolf attacks.

The Mastiff had the protection of its abundant dewlap as well as carlancas or carranclas, a kind of thick metal collars with spikes. In some places it is known as merinero dog to accompany the sheep of merino breed.

At the end of the nineteenth century with thedisappearance of the Mesta and of the cattle transfers, the Mastiff suffered a decline, which was accentuated during the 20th century and more drastically after the Spanish Civil War and its consequent period of scarcity.

The first breed standard for the Mastiff was made by the FCI in 1946, based on the characteristics of three specimens from central Spain, these specimens were of the typelight, which still remained on livestock farms and were also used for hunting.

In 1981 the Spanish Leonese Mastiff Dog Association was created, which organized a breeding program looking for the large, strong Mastiff type of times past and drew up a new breed standard.

Well.It is a very powerful and robust dog, but at the same time flexible and agile.

This breed of dog is characterized by its large head (but proportionate) and its dewlap. Small eyes (in relation to the skull) and medium-sized and drooping ears. It is a dog of great beauty that does not leave indifferent who contemplates him.

His coat is dense,thick, smooth and semi-long.

As for the colour of the coat, there is a great variety such as yellow, black, fawn, fawn... they can be uniform (they are usually the most appreciated) or combined.

Many of this breed of dog have a double dewclaw on the hind legs.