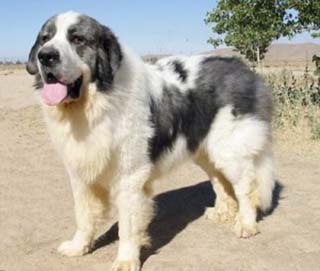 The Pyrenean Mastiff is one of those breeds of dog that are characterized by being very tame.

They are faithful companions, very affectionate and intelligent dogs. So if you are properly trained can carry out different tasks.

It is important to control the weight and the food that is put, since being very large dimensions can be highlighted too much his.magnitude.

It is a breed of dog with great height, robust and strong. It can weigh up to 100 kilograms!

See_also: Seraquin Omega, the best option for your dog's or cat's joints

The Pyrenean Mastiff is a large Spanish cattle breed, originally from the Aragonese Pyrenees. It is the only native Aragonese breed.

This molosser formerly used as a pasture dog, is nowadays a good guard dog.

The Pyrenean Mastiff is a faithful, gentle, noble and intelligent companion, with an alert expression. With the people around him he is usually affectionate and protective but not cloying. With strangers he may seem indifferent but not careless or excessively aggressive, he will not hesitate to defend himself fiercely if he is attacked.

Dog with an affectionate, gentle character.and noble, particularly intelligent, he is at the same time brave and fierce in front of strangers. In his relations with other dogs he is benevolent, aware of his singular power. If necessary, he is very skilled in the fight, showing the behavioural patterns acquired after centuries of fights against the wolf. His bark is deep and deep and his expression is awake.

The Mastiff is a dogextroverted, friendly and peaceful appearance, is a "good-natured" dog. His character makes him especially suitable for children, for whom he feels special attraction. He is big enough to protect with measured aggressiveness.

His work can also be of rescue. That is, provided he has received proper training from puppyhood, because he is well known for hisstubbornness and we would find big problems if we tried when it has already developed.

It is important not to neglect the education of the puppy and be firm from the outset.These dogs take time to respond to orders and it is necessary to have patience and perseverance.Find everything you need for the care of your Pyrenean Mastiff thanks to ourcontributors.

It is advisable to brush the Mastiff frequently and watch its weight, as if the dog gets little exercise and is fed a lot to emphasize its massiveness, the bone structure may suffer.

As with other large or molosser-sized dogs, the Pyrenean Mastiff may be a candidate for the dreaded stomach torsion.The factors thatThe most common causes are large meals and in one sitting, eating too fast, eating before and after exercise or drinking heavily.

Remember that in online pharmacies you can find very necessary accessories to maintain the care of the Pyrenean Mastiff at all times.

On its origins there are several theories. The one that has a greater weight is the.which states that it was the Phoenicians, in the course of their commercial voyages, who introduced mastiffs from Syria or India to the Iberian Peninsula. These dogs are the ones that would have given rise over the years to the various breeds of Spanish guard dogs that we know, such as the Spanish Mastiff, Refeiro de Alentejo, Mastiff of the Sierra de la Estrella and the breed that concerns us, thePyrenean Mastiff.

For centuries, this dog has been used to protect the herds that roamed the Aragonese and Navarrese Pyrenees up to the Maestrazgo.

His great corpulence helped to deter predators such as the wolf or the bear. Today, this breed of dog plays the role of guard dog to perfection.

During the 20th century and especially after the Civil War, the Pyrenean Mastiff has been used to protect the herds that roamed the Aragonese and Navarrese Pyrenees up to the Maestrazgo.Spanish, due to economic difficulties, the mastiff went into decline as it was very expensive to maintain a dog of its size.

In the 70s a group of fans began a work of recovery of the breed through the few specimens that were in the field and still had typical characteristics of the old molosser. In 1977 the Club del Mastín was created.of the Pyrenees of Spain, which organizes the selection and the breeding program of the breed.

At present this breed of dog has a great international recognition as demonstrated by the existence of clubs in numerous European countries and in the United States.

The Pyrenean Mastiff is a dog of great height, muscular and robust, hypermetric and mediolineal. Toits enormous size is not clumsy and walks with agility.

It is a very well proportioned dog, it is extremely powerful and muscular, and its skeleton is compact.

His measurements could make you think that it is a somewhat clumsy or lymphatic dog, but nothing could be further from the truth.

It is characterized by its large, strong and moderately long head and by possessing a broad and strong skull in profile sub-.Their upper lip should cover the lower lip, but there should be no flabbiness, and their mucous membranes should be black.

The teeth in these dogs are white, strong and healthy with large, long, sharp, crossed fangs for prey.

The molars of this dog are very large and powerful, while the incisors are relatively small and their bite is scissor bite.Their eyes sayThey are small, hazel-coloured and very expressive, and have an attentive, noble, sympathetic and intelligent look.

They have pointed ears that hang down to the sides and strong, thick legs.

Their fur is dense, thick and discreetly long.

The coat is white, has a well-defined mask and the ears are always spotted.

On the body it has distributed spots of theThe most common colors are white with black spot or white with beige spot.

Many specimens have a double dewclaw on the hind legs.