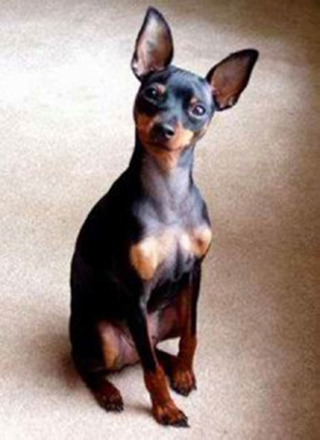 The Pinscher is a dog that has been developed especially for life on farms, as it has a great character for the guard. However, with the passage of time became company for many families.

The name of the Pinscher derives from the German meaning "biter", but in turn to the English word "pinch" by the cut that was made in their ears to avoid

The Pinscher is catalogued within the group of the molosser mountain breeds, where there are also the Doberman, for example. There are different types of Pinscher: German, miniature and Austrian.

It is a small dog that can weigh up to 16 kg. It has a good behavior, is docile, affectionate, playful and not at all cowardly. In addition, it is known for its abilities ofguardian of homes.

The Pinscher is both patient and docile with children, so their coexistence will be wonderful. For its size, many people who live in flats choose it.

It needs to perform a lot of exercise every day and that his hair is brushed assiduously, although it presents short and smooth coat, but also dense and tight to the body, does not have regions without hair. Thecolors can be red deer, dark or light brown and black.

The Pinscher offers excellent behavior if trained from puppyhood. For its part, it is a dog of great temperament, self-confident, mentally balanced, prudent, persevering,intelligent, companion and very guardian.

In addition, it is a great trotter, loves to run and be in movement. It has a harmonious movement, with strength and security. The Pinscher is an ideal dog for flats or houses with a small garden.