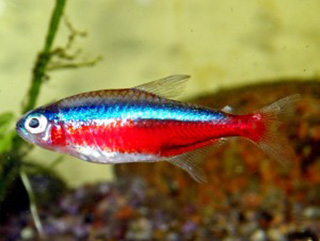 Neons and cardinals are some of the most characteristic fish in aquariums. The image of a school of these small and colorful fish moving to the beat on a green background of plants is common when we think of the aquarium hobby and, however, we speak of fish that even today are complicated to maintain, very delicate and virtually impossible to reproduce incaptivity.

The first thing to do is to differentiate well between the two species. The neon (paracheirodon innesi) is an elongated fish that has a blue stripe on the upper part of its body, while the lower half of it is red on the back and white on the front. In the cardinal (paracheirodon axelrodi) on the other hand, the lower red stripe extends over the entire body, andthe colors are much more electric and intense.

Amos have quite similar water chemistry needs, although cardinals tend to be more delicate fish.We will need an aquarium at about 26 degrees, with a ph of between 6 and 6.5 and a very low hardness, less than five to get these fish in optimal conditions.Both are very sensitive to nitrites.

At the time.When keeping them, both species are schooling fish, so they should live together in groups of at least eight or ten specimens. However, despite their physical resemblance, these fish will not mix with each other to form a single school, but will choose to align themselves only with their own species, so this must be taken into account in order not to overpopulate the middle layers of the aquarium, which are

See_also: Know the properties of Hill's Digestive Care for your dog

Their diet is very simple, accepting commercial food, and they are grateful for protein in the form of porridge or live food from time to time. Reproduction is extremely complicated, and must be done in perfect water conditions.

Previous post Characteristics and Importance of Acana Puppy Large Breed Puppy food for large puppies
Next post Doberman, get information before you buy it.