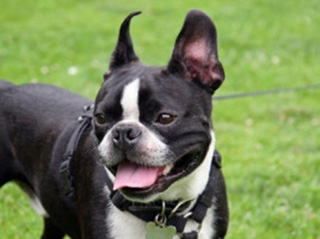 The Frenchie is the Bulldog breed with the least genetic tendency to suffer from health problems.

Despite this, it is not exempt from suffering from certain diseases, such as Von Willebrand's disease, megaesophagus, or brachycephalic dog syndrome.

Von Willebrand's disease is a disorder that consists of a lack of a clotting factor in the dog's blood.

If it doesIf you have your French Bulldog, it can suffer from exaggerated and sometimes even unjustified bleeding. Also, another common disease in dogs of this breed is megaesophagus, a dilation of the esophagus that paralyzes the motility necessary to get food to reach the stomach.

Similarly, it should be noted that the French Bulldog can suffer dysfunction.One of the most common is the brachycephalic dog syndrome. These dogs have a short muzzle, a long palate, and narrow nostrils, so they can sometimes show breathing difficulties. One of the symptoms that should alarm us in this sense, is that the dog snores louder than usual.

Otherhereditary diseases to which the French Bulldog shows special tendency are malformations such as hemivertebrae or cleft palate, various skin allergies, and some cancers. Hemivertebrae disorders appear when the puppy is a few months old, often as a result of a simple blow. Its main symptoms are incoordination when walking, and weakness of the legs and legs.hind legs.

In any case, you should always keep in mind that the disorders that your French Bulldog may suffer from are susceptible to medical treatment. If you notice that your dog is suffering from any of the symptoms of the diseases described in this article, do not hesitate to take him to your trusted veterinarian's office so that he can lead as healthy a life as possible.