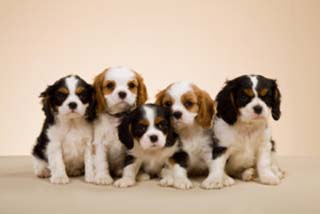 The Cavalier King Charles Spaniel breed is characterized by its long mane in the ears. They tend to be very sociable dogs who do not like to be alone.

It can reach a weightalmost 10 kilograms, because everything and his small body, has very large bones that make it appear a lower weight than it really has.

The Cavalier King Charles Spaniel is a small dog of active and cheerful temperament. Its main function is the pet company. This dog is noble and friendly with all people. An excellent selection as acompanion dog that does not require guarding. He is very easy to train.

The cavalier King Charles spaniel is a sweet, gentle, playful, affectionate and quiet dog. His spaniel heritage, however, also makes him a curious dog that likes to explore and chase.

Canine training is easy with these dogs, as they are very intelligent and learn easily. They do not excel in any particular specialty,but they respond very well to obedience training. The methods to be used have to be based on positive reinforcement, as these dogs do not respond well to traditional training. One of the most appropriate styles to educate them is clicker training.

When cavalier King Charles spaniels are well socialized and educated, they usually do not present major problems.However, they can be destructive dogs or develop separation anxiety when left alone for long periods of time.

These dogs can be excellent pets for families, couples, and single people.

They can also get along very well with children, as long as the children are old enough to know not to hurt the dog.

And they can be verygood pets for first-time owners.

Pitifully, and as with other dog breeds, the intensive inbreeding to which the cavalier King Charles spaniel was and still is subjected has increased the frequency of some hereditary diseases.Among those diseases are:

The cavalier King Charles spaniel sheds hair regularly and, therefore, needs to be brushed andcombing him frequently to keep his coat from tangling.Brushing and combing every other day is usually enough.Other than that, he only needs to be bathed when he gets dirty and not very often.

These dogs do not need large amounts of exercise, but one or two walks a day and some moderate playtime.They can live very well in a small apartment and in cities.populated.They do need a lot of company and are not suitable dogs for living outside in a yard or garden.On the contrary, ideally they should spend most of the day with their family.

During the 16th century, a small type of water dog was very popular among the nobility in England.The people of the time believed that the dogs could keep fleas away, and evensome believed they could prevent forms of stomach ailments.These dogs were sometimes called the "gentle spaniel" or "Comforter", when ladies would go on carriage journeys they would have a spaniel in their skirts to keep warm during the winter.

Charles I kept a spaniel while he resided at Carisbrooke Castle, however, it is with Charles II that hethis breed is closely related and it was said of him that "His Majesty was seldom seen without his small dogs."

There is a myth that he even issued a decree that with spaniels of this type one could not be refused entry to public places.

During the reign of William III and Queen Mary II, the long-nosed style of the water dog went out of fashion.The Pug was the favored dog inthe time in the Netherlands, and with William's Dutch origin, it became popular in England.

At this time crossbreeding may have happened with the Pug, or other flat-nosed breeds, as King Charles took on some Pug-like characteristics, but in any case, the modern King Charles Spaniel emerged.In 1852 William Youatt criticized the change in the breed:

See_also: How do cats see?

"King Charles's breed inthe present day is materially altered for the worse. The muzzle is nearly as short, and the forehead as ugly and prominent, as the bulldog. The eye is greater than twice its original size, and has an expression of stupidity with which the character of the dog also corresponds exactly."

Attempts were made to recreate the original King Charles Spaniel as early as the turn of the 20th century, with the nowextinct Toy Spaniels Trawler. These attempts were documented by Judith Blunt-Lytton, Baroness Wentworth, in the "Dogs and their Ancestors including the History and Management of Toy Spaniel, Peking, Japanese and Pomeranian", a book published under the name of the Hon. Mrs. Neville Lytton in 1911.

The Cavalier King Charles Spaniel of English origin is aMiniature spaniel that can reach 30 to 33 cm in height with 6 to 9 kg in weight.

It features a flat-fronted head, large dark eyes set wider apart than normal with high, long ears that fall to the sides of the face.

His coat is long and silky with stripes of richly colored hair such as black and tan, solid red, white and red and tricolored.

The tail is.proportionate to the dimensions of the body and carries it in movement demonstrating joy.

If you have read the contents of this article, you already know better the Cavalier King Charles, now we want to make you some recommendations of products very suitable for this breed: