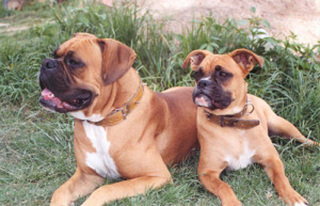 The Boxer is a very intelligent dog, loyal, faithful and guardian of his family who will not hesitate to defend at all times. It is very obedient and will never tire of playing with children.

The Boxer is a breed of dog of German origin, mainly used for the company and work. It is a medium dog, with an average life span of 14 years and characterized by a characterIt is a breed obtained by crossing the Bulldog and the Brabant Bullenbeisser, both extinct. Its first appearance was in the year 1895 in Munich.

In its beginnings, the Boxer was a war dog, very useful during the First and Second World War, to send messages, pick up wounded soldiers or carry wires ofcommunication.

The Boxer is one of the most common breeds in countries such as the United States, for example, and has a very characteristic white, brindle or finned coat. It is one of the most beautiful and aesthetic dogs that exist, according to experts.

The Boxer's character is of a very vigilant dog, at the same time faithful and intelligent. It is docile and loyal to his family.However, it can be fierce andattack other dogs with great speed and power, so it is not recommended for coexistence with other dogs, being preferable to have it alone.

When one of their own is attacked or is in danger, the Boxer will be the first to defend it.

For its part, its behavior is obedient and in addition, will take care of children like no other.

The BoxerIt lacks malice but can become a little rough when playing with children, unintentionally.

For good health, it is necessary that the Boxer exercise from puppyhood, in addition to a controlled diet to avoid excess weight.When they are small, they need to play a lot to burn calories and exercise, either with other dogs or with children at home.

See_also: SharPei, their relationship with children and in the family
Previous post Knowing your cat's behaviour
Next post All about Advantix pipettes